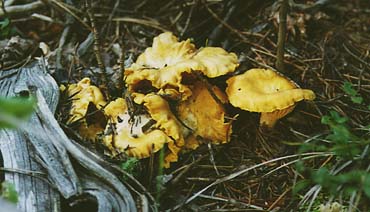 One of the most trusted and readily available of the gourmet mushrooms, the chantrelle grows abundantly on the West Coast, and throughout North America and Europe. The chantrelle is an easy mushroom to identify, but it can be tricky to find when it hides under thick duff. It has a color, odor and even a taste reminiscent of apricots. You can distinguish the chantrelle from most other mushrooms by its unique gill structure. To be more exact, the chantrelle lacks true developed gills, but rather has shallow decurrent ridges that often continue down to the base of the stem. You can often see faint crosshatch ridges that run perpendicular to the main vertical spore-carrying ridges. The interior flesh of the mushroom is nearly white. A beginner might confuse C. Cibarius with the poisonous Omphalotus Olivascens, but the latter has true gills, a pumpkin orange color with olive green tints, and flesh the same color as the surface.

I have found chantrelles in Idaho and Wyoming in August, near Pugeot Sound in September, and in the coastal mountains of Northern and Central California throughout late Autumn to mid-Winter. The ones growing in the Northwest (see photo above) tasted better and stronger than the much larger California variety (see photo below). Perhaps the soils create this difference, since the chantrelle tends to absorb flavor from the dirt around it. Chantrelles that I found up North were growing in thick conifer duff under pine and fir trees, while the those in the Santa Cruz mountains near my home grow near live oak, in clay soils high in tannin. Ours are often caked with dirt, and unfortunately posses a flavor so redolent of the clay that I occasionally wonder why I even bother cleaning them. I have learned to avoid the ones that look like they have been rained on, since the rainwater has helped them leach more flavor from the dirt.

The chantrelle offers both culinary delights and disappointments. I once made a chantrelle duxelle that ended up tasting like watered down dirty onions. I have tried cooking chantrelles with a dash of soy sauce and found that I only tasted the shoyu in the final dish. I also find the musty apricot flavor of the chantrelle limits my choices when trying to come up with flavors to match it. Anything with a strong savory or spicy quality will totally overpower this mushroom's unique hint of sweetness. Subtle flavors like nutmeg, tarragon, parsley, eggs and mild cheeses serve the chantrelle best. Often I resort to a simple sautée with chantrelles, sweet onion, cauliflower, carrots, pea pods and a dash of balsamic vinegar. The vinegar reacts to neutralize the dirt flavor a bit and leaves a subtle residue of sweetness that flatters the fruity chantrelles.

Here's a few recipes for chantrelles: 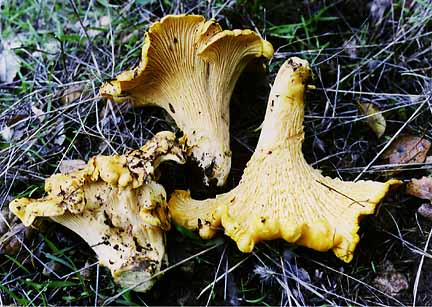