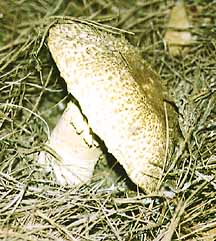 This magnificent edible definitely deserves its nickname, the prince. It grows to huge proportions, with a cap that sometimes spans over a foot across. Its size and its strong sweet almond smell are dead give-aways. It has brown spores, a speckled tan fibrillous cap, scaly stem when young, and bruises yellow when rubbed around the cap margin. It grows under monterey pines and redwoods, among others, primarily in warm moist weather along the California coast. It often grows late in the season, after most of the other mushrooms have long since retired for the year, and sometimes even fruits in the early Summer coastal fog.

The young mushrooms are so sweet and almondy that you can use them in desserts. The older specimens take on more typical "champignon" flavors along with the almond, and may prove easier to use in normal entrées; however, these older individuals will prove most useful when dried, as they often get wormy and a bit spongy in texture. 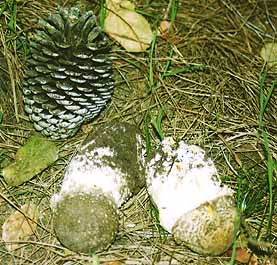 I find that the almond-extract overtones make this a challenging but exciting mushroom to cook with, because it can dominate many dishes with an unexpected richness. Nevertheless, it has one of those unique flavors that turns people into raging mushroom lovers. I rate it as one of the very best mushrooms to cook with, and because of its size, one of the most fun to find. (The baby specimens shown here weighed about a pound each, and were thicker than my forearm.)

Here are some Prince recipes: