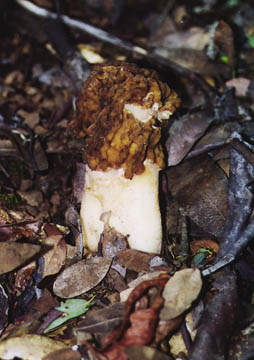 Commonly called "early morel," the Verpa is closely related to the morel, and it sprouts around the same time of year; but it differs in several significant ways. First, the verpa cap is separated from the stalk, whereas the morel cap is connected (note the chunk of cap that has fallen away from the specimen in the photo.) Second, the Verpa does not have true pits on the cap, like the morel, but rather has rows of vertical wrinkles. These closer wrinkles also distinguish the verpa from the poisonous Gyrometra esculenta, which has a more rounded, lobed "brainlike" cap.

I have eaten Verpa bohemica on two occasions, and I find it to be quite pleasant tasting, but not nearly as rich and complex in flavor as a true morel. David Arora rates it "Edible with caution" because it can apparently cause gastric discomfort when consumed in large amounts or on consecutive days.