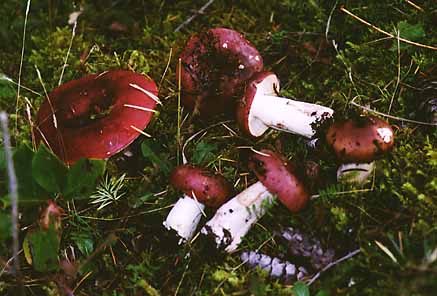 The genus russula isn't reknown for its choice edibles. The so-called shrimp russula, however, is a notable exception. It may be a complex of several species, which some books call "shellfish russula" with different species names. The most notable distinguishing feature of this russula is the mild to strong fishy smell in older specimens. The smell resembles that of Amanita velosa, and the taste when cooked is similarly nutty, but with a stronger lingering seafood flavor (especially in dried and older specimens) and an added trace of tartness that complements many dishes. With it's firm russula texture, this is truly a choice find in the forest. It seems abundant in the Northwest in early Autumn, and I have found it growing alongside lobster mushrooms (Hypomyces lactifluorum) and chantrelles. In the Bay Area it seems to favor Douglas-fir, and I have found it at the base of these trees at higher elevations in early Winter.

Notable identifying features that distinguish it from others in the Russula genus: the tendency for the stem and gills to bruise brown when handled, a pinkish or salmon colored blush towards the base of the white stem, viscid (sticky) cap when moist, and of course the fishy odor, especially in older specimens.

The process of cooking will tame xerampolina's strong fish smell, resulting in a rich, fatty tasting meatiness - not unlike like very fresh prawns. Because of its firm texture, it can make a suitable meat substitute in mild dishes. For example, it excels in pasta cream sauces as well as in garlic/butter/white wine.

Here are some dishes using the shrimp russula: