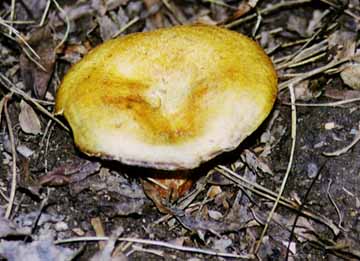 One of several edible green-staining, red bleeding Lactarius, the so-called bleeding milk cap is one of the few that I have eaten and enjoyed. I have also tried its close relative, Lactarius deliciosus, which I didn't like as much. The latter grows primarily under pine trees in Northern California, and oozes an orange latex when cut, whereas L. rubrilacteus oozes a dark red latex and favors Douglas-fir. It's easy to doubt the edibility of a tawny orange mushroom that bleeds red latex and bruises copper green. It really doesn't look very appetizing, but I find it to be quite tasty. With a rich butter/nut flavor, slightly bitter aftertaste and crispy granular texture, L. rubrilacteus would make a good addition to rice and cheese dishes, pasta or mild casseroles. Be careful to verify the red color of the latex, and don't eat it if it bleeds yellow or white and has a peppery/acrid taste.