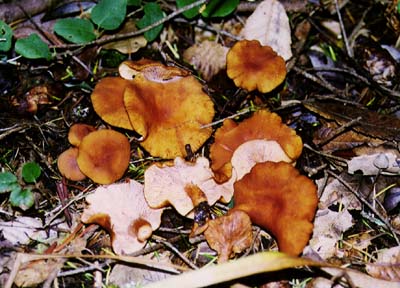 Lactarius Fragilis has also been called the candy cap on account of its sugary odor. This diminutive forest dweller might be mistaken for a generic LBM (Little Brown Mushroom) except for its reddish - cinnamon hue, wavy cap, distictive odor and slight milky-white latex. The stem tends to become hollow in mature specimens. Once cooked or dried, it emits the pungeant scent of brown sugar and maple syrup. Although it appears to be a small, insignificant little mushroom, it tends to grow in large numbers wherever it can be found, so one can easily collect enough for a meal. I found these specimens near Douglas fir and live oak in the early winter in the Santa Cruz Mountains. Their timing was perfect for the holiday season, so they found their way into a variety of desserts and sweet dishes like yam casserole. This is one of the only mushrooms I can think of that really works in a dessert, strange as the concept may seem. Their sweet smell lingers in the house and haunts any dish they enter, a mysterious taste experience that involves the nose as much as it involves the tongue.

Be careful not to confuse this mushroom with any number of other small mushrooms, especially Collybia, Cortinarius or Clitocybe species. Be sure that the latex does not stain yellw or change color. Occasionally in dry weather, the latex will be scanty, but usually the maple smell will be stronger under these conditions.

Here is a Lactarius fragilus recipe: