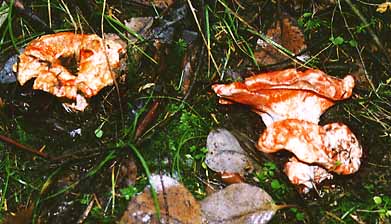 The so-called lobster mushroom isn't really a mushroom, but it is delicious. H. lactifluorum is actually a parasitic fungus that attacks certain species of Russula and Lactarius, engulfing the entire mushroom in a bumpy crust that resembles the shell of a lobster, rendering them bright red-orange, firm textured and surprisingly tasty. I found the ones pictured above in the Pugeot Sound area, but I have never seen them in California. I was cautious with eating these, although I later found some for sale at Pike Street Market in Seattle. I was cautious because there really isn't any easy way to know which mushroom species was originally attacked by H. lactifluorum. Conceivably, a toxic species (such as Russula emetica) could retain its toxicity even after becoming enshrouded in lobster skin. Oddly enough, I have never heard of any poisonings from it, so perhaps the parasite actually renders its host edible, or perhaps (as Arora points out) it might only attack edible species.

In any case, I did what I always do when I try a new edible species. I sautéed one mushroom, ate a little bit, and waited a few hours. It tasted great, and I felt fine, so I ate the rest of the cooked mushroom and waited until next day to cook the remainder. Alas, as I was travelling at the time, I never did find the opportunity to experiment further with the culinary possibilities of lobster mushrooms, so it will have to wait for another time.

The specimen that I did eat was crunchy and mild in flavor, slightly nutty tasting, but not particularly rich, sweet or heavy. The texture reminded me a bit of jicama. I can recommend it for its texture alone, which I found quite pleasing; but its subtle flavor eluded me a bit, and I withold judgement until I can try it again.