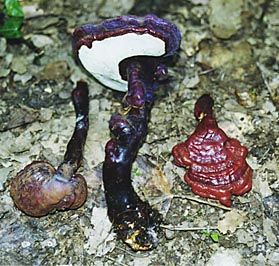 In Asia, this medicinal mushroom has a reputation as a panacea matched only by ginseng, with proported anti-carcinogenic and life prolonging properties. The Japanese call it reishi, and the Chinese call it ling chi . In China you can find giant 500 year old specimens on display in museums, once given as gifts to Emperors.

I found the samples shown here in central Italy, about 100 km from Rome. Although they appeared to be growing out of the ground, they were probably associated with a subterranean tree trunk, since they generally form as a wood-rot fungus. I have also found a variety in California that lacks the characteristic stalk that gives this polypore its characteristic "mushroom-like" stance. The local variety grows more like Ganoderma applanatum, as a shelf fungus on dead wood, differentiated from its cousin the artist's conk primarily by the presence of a shiny shellac-like lacquer polish on all surfaces except the pores. Like G. applanatum, the pores will stain brown when bruised, however, this staining reaction is slower and less obvious.

To use the ling chi fungus, you can boil it in water for about 30 minutes to make a strong bitter tea. To make an extract, you can submerge it in a jar filled with vodka, seal it tightly, then store it in a dark place for several months. I am not sufficiently familiar with Chinese medicine to recommend doses or indications for use, and you should always contact an expert before administering a medicine to yourself or anyone else. Having said that, I would guess that a little bit could hardly hurt you, considering its reputation as a cure-all!