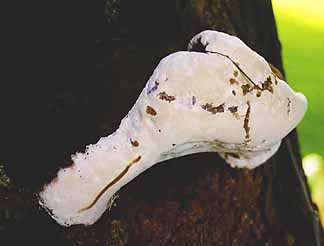 The artist's conk grows on dead or dying hardwoods, maintaining a perrenial woody shelflike fruiting structure that turns white with an active spore surface during the rainy season. Its spore print is reddish-brown, and usually easily apparent under the fruiting surface. It derives its nickname, artist's conk, from the fact that its white pore surface stains brown with the lightest touch, allowing you to draw on it with a stick or a finger (notice the brown line at the bottom left of the photo, where I made a light stroke with the tip of my finger.). I am listing it here because some herbalists credit it with medicinal properties similar to those described for its shellac-polished cousin Ganoderma tsugai (reishi or ling chi), or possibly Trametes versicolor (turkey tail) - that is to say, immune-strengthening properties. It certainly is not a desirable edible, having the consistency of cork and a flavor as bitter as unsweetened coco. For use as an herbal medicinal, harvest the fresh growths with a very sharp knife, hammer, or hacksaw, then cut into thin slices and dry. Boil the dried slices in water for at least 20 minutes, then allow the mixture to soak for a while to make a strong tea. You may want to add licorice root or honey, since it's rather bitter. Drink the tea and leave the cork behind.