The blewit, a favorite edible mushroom in many parts of Eastern Europe and the U.K., grows profusely in Northern and Central California under cypress, douglas fir and even redwoods. I have eaten so much of this mushroom that I have gotten rather tired of it, although its flavor is so unique I still collect it when I find good specimens (like those shown here.) 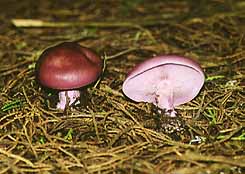 The blewit's shape, color and smell distinguish it clearly from other mushrooms. It has pink spores, purple gills and lilac flesh, with a cap that ranges from purple, to oxblood, to an odd waxy tan in older specimens. The shape is quite variable but still somehow characteristic, usually broader than it is tall, and somewhat wavy or contorted, with inrolled cap in younger individuals and broad upturned cap in older ones. It smells musty, fruity and sweet, a bit like some unnameable tropical punch. The ones that I have collected under cypress trees have tended to be more bitter than others, and less palatable. Like many choice edibles, they take on some qualities of the duff that they grow in.

The blewit's fruitiness makes it a challenge for cooking. I sometimes pair it with sweet and spicy Asian style dishes. The blewit has a strong enough character that it can hold its own in a spicy dish without getting lost (and honestly I might prefer it when it does get lost a bit.) When dried, the fruitiness diminishes and the musty-dusty flavor grows, which actually helps it to mesh better in some soups and sauces. Nevertheless, like the chantrelle, the fruity overtones left over in its blanching fluid make it difficult to use. If I ate more meat I would definitely try it with wild game, such as duck, pheasant or even venison.