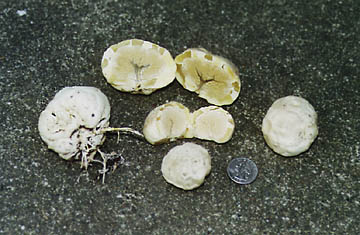 This one had me stumped for a whole month, after I found the "eggs" growing in the springtime alongside a public trail near my home. I had to wait well into the dry season before the eggs started to "hatch" into mature fruiting bodies. This amazing fungus looks like an invader from outer space, and it smells like rotting meat. Apparently it might indeed be an invader, but only from the tropics. It bears a family resemblance to the genus Phallus, or common stinkhorn, and like its cousin starts from a spherical egg with a gelatinous interior. As the egg expands, the gelatin layer turns putrid, the interior turns bright orange and bursts out in the form of a complex geodesic cage which holds the spores on its mucilaginous interior surface. The rotting smell attracts flies, which probably help spread the spores as they investigate for food. Truly an amzing creation! Apparently stinkhorns are edible in the egg stage, but I can't imagine wanting to try it. 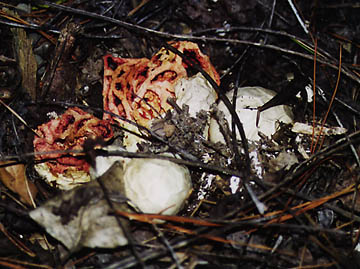