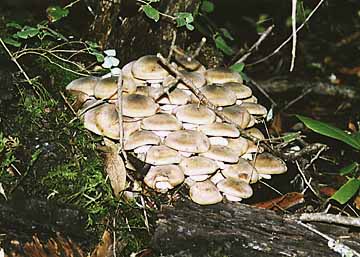 Commonly known as the honey mushroom, Armilleriella mellea is an edible gilled mushroom that grows in large clusters on tree stumps and at the base of dying trees. In actuallity, A. mellea is probably causing the death of its host. It's an insidious tree rot fungus that pays for its murderous habits by providing copious quantities of edible mushroom caps. Look for tan (honey colored) caps, often subtly speckled with brown highlights. The caps are hairy in dry weather and slimy in wet weather. The spore print is white and usually visible on the tops of caps that are lower down in the cluster. 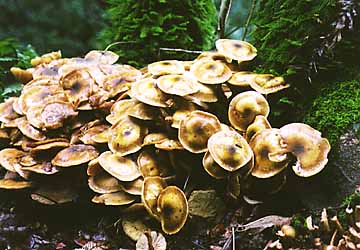 I must confess that I have been losing my taste for honey mushrooms in the last year or so. Maybe I've eaten too many, but they have started to unsettle my stomach a bit. This indigestion may be a feature of the tree species they grow on. Usually their victim of choice is oak, but I have also collected them from other trees (madrone in particular) and this may be the source of the problem.

I generally harvest only the young caps of honey mushrooms, as their stems are quite fibrous. I have been told, however, that the interior of the stem tastes excellent. I clean them with minimal water to avoid increasing their sliminess. I often cook them in asian-style dishes as if they were shiitake, as their texture is similar. The taste, however, is bland and not particularly striking. Cooking with vinegar or lemon juice can reduce the sliminess a bit, but stir-frying seems most appropriate.

Here's a couple recipes that use honey mushrooms: