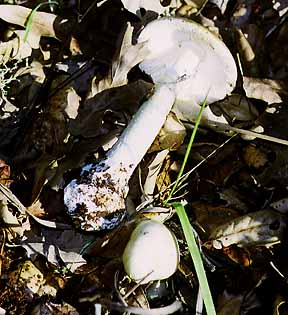 Don't eat this mushroom. It can kill you. Not as common as A. phalloides, but just as deadly. Pure white from cap to base, although occasionally turning slightly tan on the cap in older specimens, beginners have mistaken it for Agaricus campestris and other white edibles. Beginners should learn to identify the genus Amanita by the volva at the base, along with white gills and spores, and nobody should eat any Amanita until thoroughly confident of its identification. I found this specimen in the Santa Cruz Mountains in late Autumn under live oak and valley oak, a few steps away from some edible Amanita calyptrata (which unfortunately were too old to collect.)