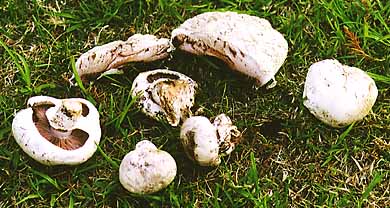 This is a very rare mushroom, which I have never before seen photographed. I have keyed it out on page 315 of Arora's Mushrooms Demystified, and have eaten it often with my archeologist friend Clay Singer, who first told me about it. It grows in a sandy grassy area in Southern California, from late Autumn to early Winter. It's a heavy mushroom, dense and misshapen, with a scaley cap often depressed in the middle, reddish brown gills and chocolate spores. The flesh stains dull orange toward red when cut, and the smell is rich and pungent. Most of the stalk grows underground, with the large cap often just at ground level. To remove it from the ground you must cut down around the cap at an angle with a strong knife and carefully pry it out.

A delectible treat, A. lanipes has an extremely concentrated agaric flavor, almost fatty in its intensity. It dries well, and the fluids from reconstitution make an amazing soup base. The only shortcoming to this mushroom - besides the inevitable competition with bugs - is the difficulty in removing all of the sand from older specimens, making it a crunchy experience at times. You can avoid this frustration by collecting only the closed buttons, which will prove easier to clean. . . if you can find it growing anywhere, that is.