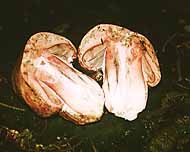 One of my favorite edible agarics, A. fuscofibrillosus fruits generously under dense cypress groves in central California. One of several species refered to as bleeding agarics, the fusco turns bright red when cut. Its latin name derives from the cap, which is covered in reddish brown fibrils. The staining reaction is so strong that the straw in one of my mushroom baskets is permanently died reddish-brown from past fuscous forrays, and my fingers become stained during the cleaning process. 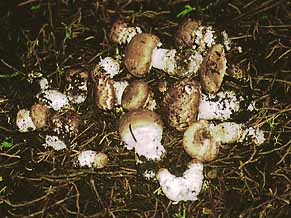 The fusco is one of the richest agarics I know, with a flavor matched only by the much rarer A. lanipes - and without the sand. The deep cypress duff that it grows in cleans off easiliy. The biggest problem with the fusco is competition with bugs. It seems sometimes that even the youngest specimens are inundated with larvae. Not for the squeemish, it's probably best just to cook it all up together and think of it as extra protein.

Here are some fusco recipes: